Keeping our Mezuzos in check (Pesachim 50) 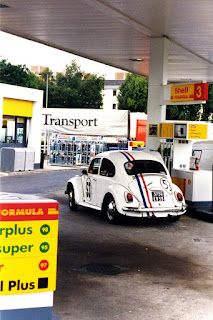 A number of years ago, Volkswagen installed its cars with a device that was able to detect if the vehicle was being tested for emissions levels.  During such tests, the engine would emit forty times less than it would whilst on the road.  You can imagine how upset Volkswagen owners felt upon hearing the news.

It’s not unusual for automobile manufacturers to realize that a component is defective and needs replacement for the sake of the occupants’ safety. But this was no ordinary vehicle recall.  Strictly speaking, driving wouldn’t directly impact those in the car.  But it would cause significant damage to the environment and the Earth’s inhabitants.

You can imagine the moral dilemma going on in the minds of Volkswagen owners at the time: “How quickly should I take my car in to be fixed?  I have a number of appointments this week.  My life is very busy.  Is it really that urgent?”

What would you do?

Four types of payment never provide a sign of blessing: Wages of scribes . . . What is the reason that one sees no blessing from wages of scribes? Rabbi Yehoshua ben Levi said: The members of the Great Assembly observed twenty-four fasts for scribes who write Torah scrolls, tefillin, and mezuzos, so that they will not become wealthy from their craft.  For if they were to become wealthy, they would no longer write these sacred items. Similarly, the Sages taught: Scribes who write scrolls, tefillin, and mezuzos, and their wholesalers, and their retailers, and anyone engaged in the sale of religious items – including tallis merchants – will never see a sign of blessing. However, if they engage in these activities for the right (non-profit) reasons, then they will see blessing.

Being a sofer is a heavenly calling.  There are so many minutiae involved in ensuring the perfection of his handiwork, increasing the daily spiritual challenges facing the sofer.  For example, (in contrast with a Sefer Torah) a mezuzah must be written from beginning to end in the correct order.  Consequently, if one were to find a mistake in one of the words, you couldn’t just erase it and replace it with the right word or letter.  You would have to discard the whole thing and start afresh.

Whilst a sofer faces moral challenges day-in day-out, each of us likewise faces challenges when it comes to maintaining kosher mezuzos and tefillin.  It’s bothersome to take down all your mezuzos; but ideally, they need to be checked twice in seven years.  Whilst tefillin worn on a daily basis have less of a regular checking mandate, pious people nonetheless have their tefillin checked each Elul, with the approach of the Days of Awe.

Why pious people specifically? Because most people reason to themselves, “It’s a pair of tefillin, what could be wrong with them already?”

It's a challenge to maintain kosher mezuzos and tefillin.   By definition, a kosher mezuzah is one that’s been checked in the last three and a half years.  And even regarding tefillin, you should be able to declare with confidence that you’ve checked them in recent memory.  But despite the challenges, like everything in this Divine universe, “Commensurate with the effort is the reward” (Pirkeit Avot ch.5).  The greater the lengths we go to for our Heavenly service, the more Heaven will shine its bounty down upon us.

Let’s return to the Volkswagen question.  No doubt most Daf YoMe learners would not have balked at the question.  Of course you would have had your car fixed as quickly as possible.  It was the right thing to do.

If that’s true of physical goods, how much greater must our concern be for our spiritual possessions.  We always want to make absolutely certain that they’re in top-notch condition.  We don’t need to wait for recall notices.  Our tefillin and mezuzos are the ropes that connect us with Heaven.  You want to make sure that your rope is in perfect working order, without a strand – so much as the crown of a letter – fraying or diminished.

The Gemara already cautioned us that safrus (scribal work) is one area of life that is fraught with moral challenges.  Let’s take the necessary steps to ensure our tefillin and mezuzos are of the highest standard and quality, and may the Almighty bless us with only good health and prosperity!

Posted by Rabbi Daniel Friedman at 7:12 AM No comments: