Why do we salt our challah? (Shabbos 42) 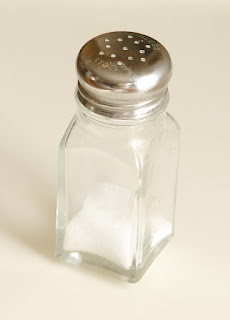 In the beginning, God created the Heaven and Earth.  On the first day, He created light and darkness.  On the second day, He separated the waters between the upper waters and lower waters.  The lower became known as ‘mayim’, while the upper became the ‘shomayim’.

The Midrash teaches that the lower waters were saddened.
“Why did the other waters merit to be close to You in the heavens?” they cried out.
“Fear not,” replied the Almighty, “I will soon present you with an opportunity to rise to even greater heights than the upper waters!”

That promise would be fulfilled during the sojourn of the Children of Israel in the wilderness. . .

Rav Yosef thought to say that salt is like a spice whose legal status is: In a primary vessel that was on the fire, salt gets cooked and therefore it is prohibited to place salt into it on Shabbat. And in a secondary vessel, into which the contents of a primary vessel were poured, salt does not get cooked. Abaye said to him: Didn’t Rabbi Chiya already teach that salt is not like a spice? Certainly he meant that in a secondary vessel it also gets cooked. And this disputes the statement of Rav Nacḥman, as Rav Nacḥman said: Salt requires cooking for as long as the meat of an ox.

Why are our Sages not clear about whether salt is like other spices?  According to Kabbalah, there are four levels of creation: inanimate objects, vegetation, animals, and human beings.  Most spices are from category 2, vegetation.  Salt, however, would appear to be the singular ‘spice’ that originates in the realm of the inanimate.   Rabbi Chaim Vital suggests that salt is a bridge species between the inanimate and the vegetable realms.  Likewise, he maintains that apes are a bridge species between animals and human beings!

What is the significance of salt in Judaism?   The Torah declares that a special covenant was made with salt, and in the Holy Temple, every sacrifice was brought with salt.  And while we no longer have a Holy Temple and animal sacrifice, one aspect that remains is the custom of salting our bread.  The Rema writes, “It is a mitzvah to place salt upon the table before breaking bread, for one’s dining table is like the holy altar and one’s food is like the sacrifice.  And the salt shields from spiritual forces of wrath.”

Why does salt have this special protective power?  First, continuing our earlier story, the Midrash teaches that Hashem made a covenant with the lower salt waters that anytime we would offer a sacrifice, it would be accompanied by salt.  When we sanctify the offering on the Holy Altar, it is elevated – together with its accompanying ‘spice’ – to the spiritual realms, far beyond the physical heavens, which are the abode of the upper waters (such as clouds).  Thus, the sacrifices are the fulfilment of God’s promise to the lower waters.

Rabbi Vital’s idea might stem from an earlier concept of Ramban, who teaches that salt has the power either to preserve or destroy.  On the one hand, prior to refrigeration, the only way to keep food for an extended period was to preserve it with salt.  In that respect, it almost has life-giving powers, like vegetation.  On the other hand, think of the Dead Sea.  Tradition has it that it is a remnant of the destruction of Sodom.  The high salt content ensures that no plant-life or fish can survive.

What was the covenant that Hashem made with salt? That He would utilize it, not only as a destructive force, but as a force for preservation of the Torah.  Every offering was accompanied by salt, and every time we break bread and dip it into salt, we are reminded that the purpose of our table, and indeed our lives, is to preserve and maintain the Torah, in its 3000-year old holy and pristine state.  That’s the commitment you make when you dip your challah in salt!

Even within the word for salt, we find positive and negative aspects, and transformative mind-sets, depending on our perspective and viewpoint.  The Kaf Hachayim notes that we dip our bread in salt, because they share the same letters: LeCHeM and MeLaCH.

So too, as we think about the world during these dark days of MaCHaLa – affliction, we ask Hashem to have CheMLah – compassion – upon us.  We need to do our part, by reaching out to those we may have fallen out with – miLCHaMa – and offer MeCHiLah – forgiveness.

We dream – CHoLeM – of the time, please God very soon, when we will sail – MaLaCH – out of this terrible situation, and be on top of things – CHoLeM (the vowel) – once again.  May Hashem bring about the transformation and elevation speedily!
Posted by Rabbi Daniel Friedman at 2:42 AM