How has Coronaprison changed you? (Shabbos 39) 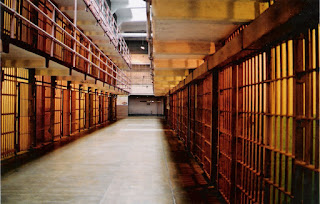 Jewish Leadership Council founder, Gerald Ronson, is one of the most prominent figures of Anglo-Jewry.  A philanthropist and community leader, his pioneering work for the Community Security Trust serves as an example for communities around the world.  His leadership and support of countless charities within and beyond the Jewish community is unparalleled.

In the early 1990s, Ronson spent six months in prison.  In his autobiography, Leading From the Front, he writes about his perspective on his daily routine during that period:

In prison, the passage of time takes on a different and variable dimension.  Looking back, time seems to have gone quickly.  But looking forward then, time went by very slowly.  To make days and weeks move faster, you had to keep busy.  Some prisoners preferred to . . . sleep the day away thinking that would make the time go by faster.  They wouldn’t use their brains to read or go to the gym. The idea of doing something constructive never occurred to them.  Even if you were only going to spend a year in jail, a year is still a long time to sit around doing nothing.

Mishnah: The people of Tiberius once ran a cold-water pipe through a canal of hot water from the hot springs. The Rabbis said to them: If on Shabbat, it is like hot water that was heated on Shabbat, and prohibited for bathing and for drinking.

This Gemara imparts an important idea about the idea of “punishment” in the Afterlife, according to Jewish thought.  Gehennom is not punishment for punishment’s sake, it is a purification process.  It should be thought of as ‘Purgatory,’ rather than ‘Hell.’  Just like the healing waters of the Tiberius hot springs, Gehennom is a healing process for the soul.  The challenges of this world leave the soul with multiple wounds.  In order to enter Heaven, those wounds must be healed.  That process of healing is called Gehennom.

That doesn’t mean that it’s a pleasant experience.  When you dab antiseptic upon an open wound, your objective is to heal.  But that doesn’t make it any less painful.  It can sting as the ointment does its job.  If physical wounds hurt when they’re cleansed and healed, one can only imagine the pain the soul endures as it is purified and prepared for a life of eternal bliss.

Gehennom, of course, is not a physical location, and does not involve the inflicting of physical pain as part of the purification process.  The anguish felt by the soul is of a spiritual nature, more closely resembling FOMO (the Fear Of Missing Out).  Imagine the soul that must watch all its friends living in the lap of luxury, with all the blessings and pleasures only Heaven could provide, while it must sit there on the side-lines, locked up in Gehennom.  That’s the ultimate pain: a lack of freedom even in the Afterlife.

There are those who are critical of certain earthly jail sentences on account of the ‘luxuries’ afforded to prisoners.  With thrice-daily hot meals, clean linens, a gym and a library, many prisoners in the West have lives that would be the dream of so many underprivileged individuals, not only in poorer countries, but even in more distressed urban areas in our country.  But they’re misunderstanding the real pain of prison: the lack of freedom to do whatever you like, whenever you like.  And to see people move about ‘freely’, while other human beings dictate where you must be at any moment of the day.  Given the mental pain it inflicts, a prison sentence is one of the worst forms of torture.

Right now, most of us are in the midst of the greatest international prison sentence of all time.  Due to coronavirus, we are confined to lockdown in what has been dubbed ‘coronaprison.’  Undoubtedly, our situation is light-years apart from actual prison sentences.  We are free to go out and purchase basic necessities.  We can leave the house for exercise and urgent needs.  But compared to our normal lives, we are in a situation of mass house arrest, particularly for those most vulnerable, who are indeed unable to leave the house at all.

Gerald Ronson’s account continues:
Prison crushes men and destroys families.  But it doesn’t have to.  Prison can make a man stronger.  The experience of being inside should be a positive one, not one that pulls you down and makes you see the worst in people.  If a man’s mind can be compared to a camera, six months in prison should cause a man to look at life in manual focus instead of automatic focus.  A spell in prison, if you make positive use of it, should teach you not to take things for granted, not to see things as the automatic lens shows them to you, but to focus for yourself on the priorities of life – family, friends, community and your own values.
You have to be strong in prison, not only for yourself but for your family.  You have to survive.  If you can do that without getting hurt and without becoming embittered, you become more compassionate, more understanding, more tolerant.  I find that when I sit around a table negotiating with people, listening to people, watching people assessing other people, I do it differently from how I used to.  I see people differently, and I see myself differently.  I didn’t think of myself as a bad person before I went to Ford, but I am a better person now.  I’m more compassionate.  I’m more confident.  I’m more tolerant, far more so than I would have thought possible.  This sense of extra strength, of uplift and inner equilibrium, came to me as soon as I walked out of those gates.

What are those values to which Ronson refers?  Beyond a shadow of doubt, topping his list is his commitment to spiritual values.  He concludes his book:
The Good Lord looked after me and gave me the strength to come through . . . Nobody should be so arrogant as to think they’re some sort of genius and did it all by themselves.  It’s the Good Lord who blesses us . . .

May the current crisis bring out the best in you and may your improved focus remain with you for the rest of your life!
Posted by Rabbi Daniel Friedman at 11:36 PM