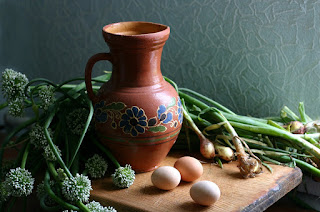 A widow once came to the Prophet Elisha in tears.  Her husband had died leaving her not only penniless, but in great debt.  Her creditor had seized her children as servants and she was at her wits’ end as to where to turn or what to do to alleviate her tragic plight.
“Tell me,” said the prophet, “what have you in the house?”
“I have nothing but one jar of oil,” replied the poor lady.
“Then go to your neighbours’ homes and ask to borrow all the vessels they have, large and small,” Elisha instructed her.  The widow set out immediately and gathered the utensils, cups and bowls, pots and pans, jugs and jars, laying them out across her bare floor.

“Now take your lone jar of oil and pour it into the vessels you see before you,” said the prophet.  The woman did so and filled up the first pot from the oil in the jar.  Miraculously, however, out from a tiny jar, enough oil came to fill the large pot.
“Don’t stop now,” said Elisha, and he motioned to her to continue to pour out oil from the jar.  The woman took the jar and poured oil into each of the vessels sitting before them, until each one was filled.  When the last teacup was full, she looked and saw that her jar was finally empty.
“Now, go and sell the oil to redeem your children,” said the prophet to the relieved lady, “and you and your children will have more than enough to live on for many years to come.”

Bar Kappara, a professional speechwriter, once quipped: If you are hungry, eat!  If you are thirsty, drink!  While the pot is still boiling, pour it out!  When the horn sounds in Rome, son of the fig seller, sell your father’s figs!

Anyone who has ever tried to lose weight will tell you that the trick is to outlast the hunger pangs.  At first, they can be overbearing.  But if you ignore them, they dissipate.  Slowly but surely, you find yourself able to subsist on less food consumption, because you didn’t allow yourself to respond to the first signs of hunger.  With time, as you eat less, weight loss follows.

Analogously, explains the Anaf Yosef, Bar Kappara is offering advice for success in this world and the World to Come.  In order to achieve success, you need to be hungry (or thirsty).  Hashem has instilled within us an appetite for prosperity.  But if you suppress your hunger, eventually you’ll get used to your situation, and you won’t be hungry anymore.  The more you suppress your appetite for success, the less you’ll feel the need to achieve success.

But that’s not what our Father in Heaven desires.  He wants you to act on your hunger, to fill your appetite and quench your thirst.  In tandem with spiritual prosperity, Judaism values material prosperity.  Bar Kappara’s advice is, ‘If you are hungry, eat!’  When you feel motivated by the natural human drive to be ambitious, embrace it.  If you’re feeling materially hungry, it’s your Father gently encouraging you to seek success in this world.

Likewise, ‘If you are thirsty, drink!’  When the Prophet Isaiah calls upon “all who are thirsty, come to drink,” he is not talking about physical water. He is exhorting the people to drink in thirstily the words of the Torah, which is compared to water.  Just like water flows from a high to a low place, so too the Torah came from Heaven and flowed down into this world.  When we embrace our thirst for Torah, we achieve prosperity in the World to Come.

Next, Bar Kappara instructs us to pour out the water while it is still boiling.  In this piece of advice, he cautions against the prevalent misconception that we should wait until peak prosperity to share our wealth with others.  If you push off giving tzedakah (charity) until the pot is fully cooked, by the time you’re ready to give, the pot will be in its cooling-off stage and you’ll feel that you no longer have the wherewithal to provide for others.

Giving tzedakah is like saving for retirement.  You need to start apportioning funds towards these two endeavours as early as possible in your career.  Very few people actually reach a point when they feel that they have ‘extra’ money to put aside or give away.  These allocations should not be viewed as discretionary spending.  The right attitude is to build retirement saving and charitable giving into one’s budget as a fixed cost.  You must give while the pot is still boiling.  When the food is fully cooked – when you reach the end of your career, and you are on a fixed income, it will become even more difficult to part with your money.

The same is true of your spiritual ‘giving.’  If you push off your spiritual munificence until you feel ready to give, you’ll never get there.  Spiritual giving means community volunteering.  It means helping individuals in need, such as life coaching a young person or helping an older person with their shopping or doctor visits.  Or it might mean a weekly chavrusa (study partnership) with someone less knowledgeable than you in Torah.  You might think, ‘How can I take time to learn with this other person, when I still have so much to learn myself?’  Bar Kappara insists that the right time to ‘pour out’ is when the pot is still reaching its boiling point.

And finally, Bar Kappara advises the son of the fig-man to sell his figs as soon as he hears the trumpet sound, without waiting for permission from his father.  As children, we are completely reliant upon our parents.  Practically speaking, that means that we are complete takers, giving nothing back to them in return.  Not only do we give nothing to them, we likewise give nothing to the world.  When babies cry, they expect their parents to give them what they need and want.  Because that’s the nature of takers in this world.

As we mature, the hope is that we progressively move along the spectrum from takers to givers.  When we get married, for the first time we are called upon to completely give of ourselves to another person.  Your spouse is the person you’ve chosen to devote all your resources to, from the material to the emotional, psychological, physical, and spiritual.  The secret to a happy marriage is to expect nothing in return.  When your spouse does indeed love you back, it should feel like a bonus.

And right or wrong, most people do anticipate that their spouses will respond with like-mannered devotion and dedication.  When we have kids, however, our ability to give selflessly is truly tested.  When we give to our children, we have no expectation whatsoever of a reciprocal arrangement.  We give and expect nothing in return.  That’s the ultimate mature condition.  And it’s that commitment to wholly beneficent giving that we should carry into the charitable arena generally.  We give because we want to be net-givers to this world, not because there’s anything in it for us.  That should be our attitude towards both material giving and spiritual giving.

When he tells the son of the fig-man to sell the figs, that’s what Bar Kappara means.  The son doesn’t need to wait for his father’s permission to try his hand at business.  The father receives the ultimate pleasure and satisfaction when he sees his son cut the proverbial umbilical cord.  If he’s able to make decisions independently, and make money without the father’s constant involvement, the father is content.  The first step towards becoming a net-giver in life is to take responsibility and ownership for one’s actions and decisions.

If that’s true of a mortal parent, it’s certainly the case regarding our Father in Heaven’s hopes and dreams for us.  In fact, the Almighty provides us with an inkling of His capacity to give, in order that we should follow in His footsteps.  God’s giving is unlimited and that’s the perspective He wants us to strive for. Where do we see Hashem’s capacity to give in an infinite capacity?

Concerning Torah wisdom, King Solomon writes (Proverbs 3:14), “Its trade value is better than silver and its yield is greater than gold.”  Any business transaction involves one party exchanging goods with another, with the total value remaining the same. By contrast, explains Rashi, when one says to their friend, ‘Teach me a chapter, and I’ll teach you a chapter,’ they now each have both teachings.

Torah wisdom, and wisdom generally, are so much more powerful than earthly treasures.  Wisdom is limitless.  You can share the same piece of wisdom with any number of people.  Not only will you make each of them richer, but by listening to their wisdom in return, you become richer and richer with every person you meet!  That’s the gift of unlimited giving we’ve received from our Father in Heaven.

But in reality, when you believe that all your material assets come from the Almighty’s bounty, you realize that just as His treasury is unlimited, so is your capacity to give to others.  The more you give, the more He will replenish your storehouse.  Think of your hot water boiler.  When you turn on the tap, new water immediately enters from the other end to fill the void created by your act of releasing the water.  That’s how the Almighty’s bounty works: the more you give, the more He provides you with the capacity to give.

Just like the oil that flowed from the jar of the widow who turned to the Prophet Elisha in desperation, our Father in Heaven is not limited by the size of our physical vessels.  It may appear that your jars are small and holding a limited quantity of oil, but that doesn’t stop the Almighty’s ability to make that oil go much further than you could ever have imagined.  Just think about the oil on Chanukah – naturally, it should have lasted only one day.  But God doesn’t work according to the rules of nature.

Any person who has been blessed with children will tell you that the birth of their second did not at all diminish their ability to love the firstborn.  Rav Dessler teaches that the word for ‘love’ in Hebrew is ‘ahava’ is related to the root word ‘hav’, meaning ‘give’ in Aramaic.  Our capacity to love is unlimited and, as children of the Divine, our capacity to give is likewise unlimited.  We feel it organically with our children.  The challenge in life is to take that same capacity for unlimited love and share our generosity with as many of God’s children as we can.

Hashem created this world to give of His bounty to His children.  His greatest pleasure is to see you jump at the sound of the horn and sell His figs, by following His ways of unlimited love.  May you progress quickly from being a net-taker to becoming a net-giver and realize your Divine power to apportion His love infinitely!
Posted by Rabbi Daniel Friedman at 11:08 PM