Should I continue Daf Yomi? (Brachos 64) 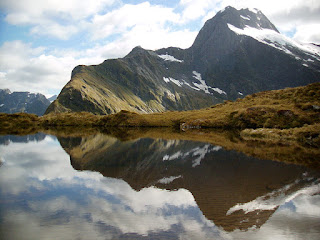 Rabba and Rav Yosef were the two leading minds of the generation.  They were the best of friends and so all the rabbis were concerned for the day they would have to choose between them to succeed the aging Rosh Yeshiva.  But life goes on and the dreaded day eventually arrived.
Knowing their particular strengths, the Sages decided to put the question to them directly.
“Rav Yosef, your mind is like an encyclopaedia! Does it not make the most sense to appoint you as the new head of the academy?”
“But then again, Rabba, you are able to analyze every topic in such a way that is completely unparalleled.  Perhaps you should be our choice?”

Rabbi Avin HaLevi said: If one forces the moment and attempts to take advantage of an undeserved opportunity, the moment forces him and he is pushed aside. If one yields to the moment and relinquishes an opportunity that presents itself, the moment yields to him. We learn this from the story of Rabba and Rav Yosef.  Rav Yosef was Sinai, and Rabba was one who uproots mountains. The moment arrived when they were needed. They sent the following question there: Which takes precedence, Sinai or one who uproots mountains? They responded to them: Sinai takes precedence, for everyone needs the owner of the wheat. Nevertheless, Rav Yosef did not accept, as the Chaldeans informed him: You will preside for only two years.Rabba went on to preside for twenty-two years. After he died, Rav Yosef presided for two and a half years. And all those years that Rabba presided, Rav Yosef did not even call a bloodletter to his home (to serve him).

We all have different learning styles and dispositions and each has its advantages and disadvantages.  Rav Yosef was Sinai, meaning that he had encyclopedic knowledge of Torah.  Rabba was an uprooter of mountains, meaning that he had an incredible ability to analyze and scrutinize a concept.  A colleague may have made the most rational case imaginable in favour of a particular concept.  But then along Rabbah would come and ‘uproot the mountain,’ poking holes in the arguments and demonstrating the weaknesses of the position.

We need both types of wisdom. The equivalent in the ivory tower are contrasting professors.  One knows everything about anything.  You can go to them with any question and be sure that they will have an answer for you.  The other might be nowhere near as well read, but in their niche field, they are head and shoulders above the rest.  They’ve analyzed the concepts thoroughly.  Because that’s the way their minds work.  They hone in on a matter of ambiguity and, through their research, are able to provide clarity.  Likewise, when you ask them a question about another area of scholarship, even though they might know very little about the subject, they will ask all the right questions to examine the issue through and through.

That’s why Daf Yomi works for some learners but it doesn’t work for others.  Some people love the speed of the initiative and are excited by the amount of material they are able to cover.  Others feel that they’ve covered so much ground that they are able to recall very little of the material.  They would prefer to spend a week or two on each page of the Talmud.  Debating which approach is preferable is futile, because it’s a case of ‘different strokes for different folks.’

In yeshiva, the Talmud is studied at varied paces at different times of the day.  You might go a little more in-depth in the morning, but cover more ground in the afternoon.  After a number of years, yeshiva bochurim figure out what makes the most sense for them personally.  That does not imply that the other approach is wholly discounted.  Rather, one acknowledges how to focus one’s efforts.  And of course, this dichotomy of learning styles is not an either/or question.  Most of us fit somewhere along the spectrum between the two.

We’re now at the end of the first tractate of the Talmud, Brachos.  For some, the experience has felt like a crazy whirlwind.  They can’t imagine continuing at the same pace for seven years.  For others, it has felt so refreshing to wake up each day and cover new ground.  They’re proud of their achievement, they can look at the first volume of the Talmud and say, ‘I’ve read that book’ (even if they should be saying, ‘I’ve learned through that sefer’).

Neither feeling is more or less kosher.  Only you know what works for you.  If you feel it’s time to slow down, then the most important thing is never to go a day without learning Torah.  Daf Yomi is not just known for its speed, but also for its disciplinary effect.  You are forced to allocate time to learning every single day, because if you were to miss a couple of days, it would be very difficult to catch up.  If Daf Yomi’s not your thing, you need to find other methods to ensure that no day goes by when you are not devoted to new Torah learning.

A hearty Mazal Tov to you if you’ve made it through the first volume of the Babylonian Talmud.  Likewise, if you’ve learned something new each day with DaF Yo.Me, new Torah ideas which you were not engaged with previously, then Mazal Tov to you too.  You can proudly call yourself a card-carrying member of the biggest global book club.  You may not have read the entire Daf, but you’re keeping up with the best of them.  Daily learning takes incredible commitment of time and effort.  Your life becomes richer and you will be rewarded immensely by Heaven.  May your commitment and enthusiasm never wane as we begin our journey into the next exciting tractate of the Talmud!
Posted by Rabbi Daniel Friedman at 12:30 AM