Poor People Can Give Too (Shabbos 2) 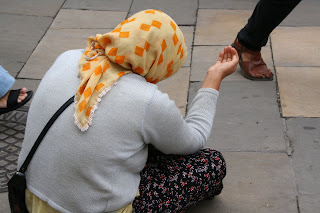 The Baal Shem Tov once instructed his disciples to embark on a journey. Not unlike the many missions they’d been on in the past, the Besht did not tell them where to go, nor did they ask.  They allowed faith to direct their wagon, confident that the destination and purpose of their trip would be revealed in due course.

Their wagon carried them through half the night.  But then, just after midnight, it stopped abruptly at an inn by the side of the road.  As the hour was late, they were quite relieved, having neither eaten nor slept all night.  Lo and behold, as they entered the inn, they were pleased to see that the innkeeper was Jewish and that the food would be kosher.

But the disciples were extremely pious and insisted on the highest standards of kashrut.  And so when they learned that their host planned to serve them a meat meal, they asked to meet with the shochet of the house.  Although he had already retired for the night, he got up to greet the esteemed guests.  They proceeded to interrogate him as to his knowledge and religious practice, and insisted on examining his knife for any possible blemishes. Their discussion of the kashrut standard of the food continued throughout the meal, scrutinizing each new food that appeared for the sources of every ingredient.

All of a sudden, amidst the din of their chatter, they head a voice from behind the oven, where an old beggar was resting with his shopping trolley. “My dear rabbis,” said the poor soul, “are you as careful with what comes out of your mouth as you are with what enters into it?” The chasidim concluded their meal in silence, climbed onto their wagon, and set out home in the direction of Mezibuzh, with a clear understanding of the purpose of their physical and spiritual journey.

The first Mishnah in Tractate Shabbos deals with the prohibition of moving an object from a private property to the public domain or vice-versa on Shabbos.  This transfer forms the basis of the melacha (forbidden activity) of carrying, which is proscribed, unless an eruv is present.

When reading this Mishnah, two questions spring to mind.  First, why does the Mishnah use the example of a poor person collecting at the door of a householder to demonstrate different domains on Shabbos?   Second, in half the examples, the pauper is giving something to the householder.  What is he giving him?

In response to the first question, the Rambam explains that the Mishnah simply uses pauper and householder as shorthand to distinguish between ‘the fellow standing inside the private domain’ versus ‘the fellow standing in the public domain’.  According to Rabbi Ovadiah Bartenura, however, the Mishnah wants to impress upon us the importance of Shabbos.  Lest you think that the obligation of charity might override the mitzvah of Shabbos, our Sages make it clear that Shabbos must still be the guiding principle.

Nevertheless, implicit in the Bartenura’s answer is a powerful moral lesson.  Why, asks the Bartenura, are you so concerned about violating Shabbos at this point?  Maybe your real issue is your violation of the laws of tzedakah!  Here you are worrying about sticking your hand over the threshold and what that might mean in terms of transferring property from one domain to another on Shabbos.  But there’s a simple solution: Invite him inside!  Seat him at your Shabbos table!  And then there doesn’t have to be a transfer at all, as you’re both in the same property.

And with that, we have the solution to the second question.  What is the pauper giving the householder?  The answer is that, at first glance, he might not appear to have anything to offer you.  But once you sit him down at your Shabbos table and get to know him a little, you may find that he has a wealth of intangible delights to share with you.   When you first open the door to him, you view yourself as the giver and him as the receiver.  But the Mishnah reminds us that there could be so many precious thoughts and ideas that he has to share.  But the only way you’ll know is to invite him inside.

Many of us have preconceived notions about paupers and their ability to contribute anything of value.  After all, if they had anything to offer, what are they doing on the other side of the threshold?  On one cold winter night, I learned to question such assumptions.

Canada can get pretty cold and icy in the winter.  One way to melt the ice and avoid accidents is to lay down sand and salt.  Our shul in Edmonton had a sizable wooden box where it stored the de-icing sand.  Late one night, I happened to come to the shul to pick up something from my office.  As I pulled up, I saw a group of teens gathered around the sandbox.  They didn’t belong on the shul property and so I rolled down my window and asked them what they were doing.

They started to stammer a response, but they stopped when the reason they were gathered became apparent.  A middle-aged man climbed out of the sandbox, told the kids to go home, and came over to my car.  His first words were, “Please don’t make me leave.  It’s cold out there.” We got talking and it emerged that this man was homeless.  Every night, a number of wonderful, kind teens from the neighbourhood would come by with some sandwiches and their dinner leftovers for him.

He told me the sad story of how he ended up homeless and living in a box.  He was an average joe who had simply fallen on hard times.  Unable to find work, eventually his marriage had broken down.  One circumstance led to another and here he was, living day by day.  I asked him why he didn’t go to a homeless shelter.  “Are you kidding me?” he replied, “those places are dangerous.  Unless you sleep with your shoes under your head, you’ll wake up in the morning without them.”

When we open the door to a poor person, we’re tempted to assume that we’re not just better off than them, we’re better than them.  The truth is, most of the time, you’ve just been dealt a better financial hand than them.  The man in the box was a fine individual with whom these teenagers enjoyed chatting each night.  He may have fallen on tough financial times, but he still had a positive attitude and was interesting to talk to.  They felt he had something to share and they were able to restore his purpose in life.

It’s important to remember that even if he hadn’t been interesting to talk to, it still would have been a mitzvah to talk to him.  Tzedakah is not just about the coin I drop in the pauper’s cup.  It’s just as much about uplifting their spirits.  Having that individual at your table can do wonders for everyone at the table, from the poor person to you and your family.  Now he’s a mensch, an equal member of the Shabbos table.

Indeed, implicit in our Mishnah is the imbalance between householder and poor person.  In distinguishing between classes of people in the context of the private domain versus the public domain, our Sages appear to be making a social statement on how we view the poverty ‘threshold’ in Judaism!

This generosity of spirit, of course, doesn’t only find expression at home.  It’s important on any occasion that you encounter someone less fortunate.  It might be a beggar in the street who could do with a smile and a ‘How are you doing this morning?’  Yes, the coin is important.  But the treatment as a fellow human being is priceless.  Who knows?  That uplifting of his spirit might be the inspiration he needs to turn his life around.

It’s not easy.  We’re busy.  They always catch us at the wrong moment.  But instead of viewing the moment as a burden, the challenge is to use the moment to quietly thank Hashem for all the blessings in your life.  And then, to turn around to the individual who needs your help and take a moment to give them a blessing.  And if you can still spare a moment, ask them to teach you something or give you a blessing in return.  It will make a world of difference to their self-esteem, and you never know, you might actually learn something new!

All of Hashem’s children are precious.  Every human being was created differently and with different challenges.  But He loves each of us equally.  May you learn to treat every one of His children with the utmost dignity and respect and as a complete equal!
Posted by Rabbi Daniel Friedman at 5:45 PM