Inspired by a Rainbow 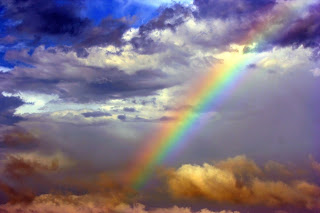 Barely ten generations had passed since the Creation, and the world was already corrupt.  From human beings to the animal kingdom, violence was rampant and immorality was the order of the day.  Only one man and his family stood out as uniquely righteous, Noah.  G-d ordered him to build an ark and gather two of each kind of animal, along with seven pairs of kosher animals.  These fortunate souls would be saved from the impending destruction of the planet.  Noah did as he was instructed and the Almighty sent a Great Flood that lasted for forty days.

Upon emerging from the ark, G-d made a promise to Noah.  No matter the behaviour of humankind, never again would He destroy the world.  As a sign of the covenant, He produced a rainbow, pledging His commitment to recall His mercy whenever our behaviour might warrant His attribute of harsh judgment.

Rabbi Alexandri quoted Rabbi Yehoshua ben Levi: One who sees a rainbow in a cloud must fall upon his face, as it is stated: “As the appearance of the rainbow that is in the cloud . . . And when I saw it, I fell upon my face.” In the West, they would criticize such a response, because it appears as if one is bowing to the rainbow. As far as blessing is concerned, however, all agree that one certainly recites a blessing. What blessing does one recite? Blessed…Who remembers the covenant. It was taught in a baraisa: Rabbi Yishmael, son of Rabbi Yocḥanan ben Beroka, says that the blessing is: Who is faithful to His covenant and fulfils His word. Rav Pappa said: Therefore, let us say them both: Blessed…Who remembers the covenant and is faithful to His covenant and fulfils His word.

Falling on the face generally symbolizes teshuvah (repentance).  Each morning and evening, we fall on our face as part of the tachanun prayer, when we beseech G-d’s forgiveness.  The first people to pray in such a manner were Moshe and Aharon, who fell on their faces, in a moment of introspection, during Korach’s attempted coup.

Rainbows are probably the most beautiful of Hashem’s creations.  The array of colours, the unique shape, the sun glistening off the drops of water.  Why does Rabbi Alexandri recommend falling on one’s face upon seeing a rainbow?  Why would seeing a rainbow prompt a teshuvah moment?

When we consider what the rainbow represents, it’s actually terrifying.  The rainbow is G-d’s sign that right now He is minded to destroy the world.  He feels that we are so corrupt that it’s time to start all over.  But He’s acting mercifully and withholding His wrath.  In other words, the appearance of the rainbow is bad news.

Consequently, the Shulchan Aruch states that one should not gaze upon a rainbow.   In fact, according to the Chayei Adam, even when one notices a rainbow, one should not inform one’s fellow. If you’ve seen the rainbow and your friend hasn’t, perhaps Heaven is sending you a message, a message unnecessary for your friend to receive.  When you see the rainbow, you should be spurred on to teshuvah.  If he hasn’t seen it, and you point it out to him, you’re essentially implying that his behaviour falls short and warrants teshuvah.  Now who are you to judge?

The Midrash teaches that King Chizkiyahu and Rabbi Shimon bar Yochai were so righteous that the rainbow did not appear during their lifetimes.  Their merit was so great that it protected the entire generation from Heaven’s wrath.  While they walked the Earth, there was no need for a rainbow, because the merit of their righteousness ensured that the world was protected.

But how is that possible?  A rainbow is a naturally-occurring phenomenon!  In fact, Pirkei Avot teaches that the first rainbow was fashioned by G-d during twilight on the Sixth Day of Creation.  While it may not have become a covenantal symbol until after the Great Flood, it certainly existed in nature prior to that event.  It’s difficult to believe then that there were eras, during which no rainbows appeared.  After the rain comes the rainbow!

Take a moment to think about the phenomenon of rain.  Is it a good thing?  On the one hand, nobody likes getting wet.  On the other hand, without rain, the crops wouldn’t grow and we would suffer from drought.  What’s the solution?  Let it rain at night!  When it rains at night, it’s a win-win situation all round.  The crops get the saturation they need, and we get clear blue skies to enjoy during the sunlight hours. When that happens, inevitably there are no rainbows, because the sunbeams are not present to reflect off the raindrops.

That’s the meaning of the rainbow’s absence during the period of King Chizkiyahu and Rabbi Shimon bar Yochai.  The Rema explains that they were so righteous that, as a result of their merit, during their generation it only ever rained at night!

Rabbi Yochanan ben Beroka’s version of the blessing is so powerful.  He maintains that G-d is faithful to His covenant.  According to the Avudraham, the meaning is that G-d remains faithful to His end of the deal, even when we’re not keeping our end.  What’s more, He “fulfils His word,” meaning to say that, even if He hadn’t made a formal covenant, the mere fact that He said that He would never destroy the world again would have sufficed as a guarantee of His commitment to us.

That should be our response to the rainbow.  When we see a rainbow, we should feel inspired and loved.  It’s a sign that no matter who you are or what you’ve done with your life, our Father in Heaven loves you.  He never forsakes His covenant.  He never gives up on His love.  That should inspire us to return the love.  To want to keep our part of the bargain.  To reinvigorate ourselves in His service.

A rainbow is a reminder to Hashem of a deal He made.  But it should also serve as a reminder to us that it takes two to covenant’ango.  Next time you see a rainbow, may you be inspired to a greater love and commitment towards Heaven!
Posted by Rabbi Daniel Friedman at 3:35 PM