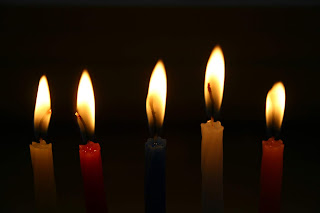 Chanukah is the Festival of Lights.  We all know the reason for the celebration.  After driving out the Greeks from Israel, we found only a single pure flask of oil, enough to burn but one day in the Menorah in the Holy Temple.  Miraculously, it burned for eight days, enough time to produce a new batch of kosher oil.

One of the most famous halachic questions about Chanukah concerns the length of the festival.  If there was enough oil in the jug to last for one day and a miracle occurred extending its life to eight days, then were there not merely seven miraculous days?  One answer is that each day only one eighth of the oil in the menorah disappeared.  And so even on the first day, while all the oil should have disappeared, only a small amount was burned.  And so that day too was miraculous.

Based on the gradually disappearing oil, the Pnei Yehoshua suggests the logic of Beis Shammai’s position over Beis Hillel’s.  In the Holy Temple, on day 1, the Menorah contained eight micro-units of oil.  By the next day one eighth was depleted and seven micro-units remained.  And so on, until the eighth day when only one micro-unit remained.  Therefore, the logical way to remember the miracle is to light eight on the first night and one on the eighth night.

So why don’t we follow Beis Shammai’s approach?  We don’t do because it would be hard to maintain our religious fervour in such a scenario.  Picture, for a moment, how the original Chanukah miracle worked according to this understanding.  On day one, everyone would have been incredibly excited about the miracle.  But then on day 2, they would have said to themselves, ‘Well we see what’s happening here.  Only one eighth has depleted.  So we’ve got another seven days of miracles ahead of us.’  And so the novelty would have worn off by day 2 or 3.  If we were to light according to the diminishing oil theory pattern, we too would lose our interest and enthusiasm pretty quickly.

Therefore, others suggest that the miracle of the oil on day 1 was that none of it disappeared!  When the priests returned at the end of the day, each cup of the Menorah was still completely full of oil, despite having burned all day.  Thus, a miracle occurred on each of the eight days, and we therefore celebrate for eight days.  Consequently, according to the view of Beis Hillel, each day we have one more day’s miracle to celebrate and we must increase our number of lights each night of Chanukah.

But while the miracle of the oil’s constancy would have been incredible to witness, you can imagine that the underlying tension still remained in the hearts and minds of the Jews at the time of the Chanukah story.  Okay, so it’s lasted for today.  But who knows what tomorrow will bring?   Tomorrow, all our resources may be depleted, which may signify that we will be overpowered by our enemies.

That’s why Beis Shammai teaches that the number of lights should corresponds to the sacrifices of Sukkot.  The two festivals of eight days are connected in many ways, including the juxtaposition of the mitzvot of Sukkot and the Menorah in the Torah.  On Sukkot, we would offer seventy sacrifices corresponding to the seventy nations of the world.  But with each ensuing day of the festival, the sacrifices would diminish in number.  The Rokeach explains that Beis Shammai wants to demonstrate that the power of the gentile nations to subjugate us – as they were prior to the Chanukah miracle – slowly declines.  We mark each day of Chanukah with a diminishing number of candles, symbolizing their waning strength.  That should give us comfort and hope for the future.

Beis Hillel doesn’t disagree with Beis Shammai’s thesis.  However, in their opinion, it’s important to stay positive.  While it’s true that the nations’ power over us is declining, let’s focus instead on our increasing strength.  And so they insist we should increase the number of lights to demonstrate how much stronger we feel with each passing day.

We’re all familiar with the scene on the first night of Chanukah.  Everyone is excited.  It’s the festival of lights.  We run to prepare the lights ahead of time and we all gather around the menorah and sing the long version of Haneros Halalu and every verse of Maoz Tzur (even the new one that didn’t appear in the Singers Prayer-book).  By the second night, we’re lighting a little later, once we’ve managed to get everyone away from their screens and homework.  By the third night, an appointment has run late at work and the family is lighting after dinner.  And who knows what’s happening by nights seven and eight?!

Chanukah challenges each of us to tap into our increasing strength and make each night feel miraculous.  Every increasing candle is a symbol of greater spiritual power that Heaven has bestowed upon us.  We must not neglect the opportunity to tap into it.  It’s tempting to feel the slowing momentum around us.  But that’s the waning power of the forces of subjugation and assimilation you’re feeling.  The power of holiness is increasing.  Chanukah serves as a reminder that as long as we are continually growing in our commitment to Heaven, no external force will be able to stop us!

We’re currently in dark days.  Each passing day the monotony of isolation can start to wear away at even the most upbeat, positive people.  But when we allow ourselves to get weaker in our passion for Yiddishkeit and life, we give permission to the forces of darkness to grow stronger.  The more spiritual light we bring into our lives, the more we banish the darkness.

The light is just around the corner.  In the meantime, every mitzvah you do, every new religious observance you engage in, every positive thought you share, dispels a little darkness.  May you merit to be a darkness-buster!
Posted by Rabbi Daniel Friedman at 11:06 PM