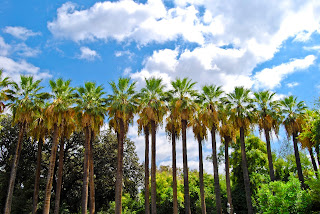 Rav Kahana accompanied Rav Shimi bar Ashi from the town of Pum Nahara to the palm grove in Babylonia.  When he was taking leave of him, Rav Kahana asked Rav Shimi, “Master, is it true what people say that these palm trees of Babylonia have been in this place since the time of Adam the first man?”
Rav Shimi replied, “You remind me of something that Rabbi Yossi the son of Rabbi Chanina taught: What is the meaning of the verse (Jeremiah 2:6), “In a land through which no man has passed and where no person [adam] has settled”? This verse is difficult to understand.  If it is a land through which no person has passed, how could anyone have settled there? The statement that “no person has settled there” is redundant. Rather, this verse comes to teach that every land through which Adam the first man passed and decreed that it would be settled was eventually settled, and every land through which Adam passed and decreed that it would not be settled was never settled.

Some situations can pose quite the challenge.  You’ve just had a tough conversation with your boss or your coworker.  You made sure to begin the conversation with various niceties.  You then said what needed to be said.  But before leaving the office, the Gemara’s challenge is to find a kind thought with which to conclude the conversation.  Mari explains that the purpose of departing from your fellow with words of wisdom is so that they remember you well.

While that advice is important generally, it’s acutely important when we’re dealing with family relationships.  It’s normal to have little disagreements with parents, children, and siblings.  And most of us are pretty forgiving about them.  You might have said or done something out of line, but the next time you see your sister, both of you have long forgotten whatever upset you. After all, family will always be family.

That works most of the time, but there are risks with that approach.  We’ve all heard stories of family members whose final conversations before they passed on got a little heated.  Now their loved ones are no longer around and they’re devastated at their inability to say sorry.  Adopting our Sages’ advice means that you never need to worry about living with regret.  Even if you’ve said something upsetting to a friend or family member, you didn’t hang up the phone until you concluded the conversation with something nice.

You might be thinking to yourself that you don’t always have a pearl of wisdom to share on the spot.  The Talmud’s example about Babylonian palm trees and Adam’s global sojourn, however, illustrates how easy it is to come up with a spiritual thought.  Essentially, when all else fails and you can’t think of any wisdom to impart, look at the world around you and think about Adam and Eve traversing the planet in total tranquility, undisturbed by any of the challenges of the twenty-first century.  We take palm trees for granted.  But when Adam and Eve saw them for the first time, how inspired must they have been!  How grateful must they have felt to the Almighty for creating such a beautiful world!

In summer 2018, thirteen young men were trapped in a cave in Thailand, living in total darkness for over ten days.  One of the consequences of their ordeal, says Thai psychiatrist Dr. Tee Jareonsettasin, is that they now perceive everyday natural occurrences as “surreal.”  A lot of people are moved by a beautiful sunrise or sunset, but how many of us are inspired when we see the sunlight reflect off a drop of dew sitting on a leaf?  We have so much to be grateful for and inspired by, if we would only tune in to the wonders of creation!  Simply making your fellow more aware of the Creator’s magic, and asking them to imagine how long the palm trees have been there and where they came from, is an integrally spiritual experience.

Always find something positive and inspirational with which to end a conversation.  Our Prophets of yore found words of praise and consolation even after offering the bleakest outlook for the future.  May you always be remembered for the optimism and wisdom you instilled into people’s lives!
Posted by Rabbi Daniel Friedman at 7:51 AM