When all you want to do is curl up and disappear 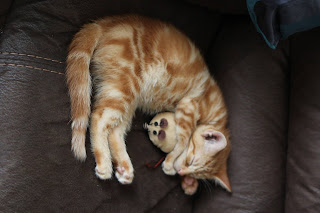 The Children of Israel were getting impatient.  Moshe had promised them that he’d return from Sinai within forty days.  The fortieth day had dawned and their leader was nowhere to be seen.  A few troublemakers began to agitate, and in no time at all, Aharon found himself facing a mob of thousands demanding answers.

‘Where is your brother?’ they clamoured. ‘This G-d who claims to have redeemed us from Egypt is nowhere to be seen.  We want a new deity to worship.’  And with that, they gathered their gold and silver and fashioned a Golden Calf.  The people began to sing and dance around the idol.
Meanwhile atop Mt. Sinai, Moshe was just getting ready to descend to the people, Tablets in hand.  G-d stops him and informs him of the catastrophe unfolding at the foot of the mountain.

“Hashem said to Moshe: Go and descend, for your people whom you have brought out of the land of Egypt have strayed.”  What is the meaning of “go and descend”?  Rabbi Elazar said: The Holy One, blessed be He, said to Moshe: Moshe, descend from your greatness.  The only reason I granted you prominence was for the sake of Israel.  Now that Israel has sinned, what do I need you for? Immediately, Moshe’s strength waned and he was powerless to speak in defense of Israel.  But when He declared (Deut. 9:14), “Take leave of Me and I shall destroy them,” Moshe said to himself, ‘This matter is dependent upon me.’ Immediately Moshe rose and strengthened himself in prayer, and beseeched God for mercy for Israel.

Can you imagine how Moshe must have felt upon hearing the news of the Israelites’ fall from grace?  Everything up until that point had been going so splendidly.   He had led hundreds of thousands, if not millions, of Hebrew slaves out of Egypt.  He had crossed them over the Red Sea, and stood together with them watching their oppressors perish forever.  He had brought them to Mt. Sinai and orchestrated a national covenantal relationship between G-d and Israel.

And then G-d breaks the terrible news to him.  What was Moshe’s initial reaction to G-d’s announcement?  He lost all strength and will to deal with the situation.  It felt like all his efforts had been for naught.  The Israelites’ failure meant his own failure.  He probably felt like curling up and disappearing.  Feeling entirely inadequate, our Sages present an image of Moshe standing there with nothing left to say, wallowing in self-pity, so to speak.

But then Moshe realizes that there’s no time for self-pity.  If he doesn’t pull himself together, it will indeed be the end of the story for everyone.  He girds his loins, gathers all his strength, and begins to pour out his heart to the Almighty.  And not content with prayer alone, he tops it all off with a challenge to our Father in Heaven.  ‘Forgive the nation.  If not, erase me from Your book!’  Once Moshe had reoriented himself, he was prepared to do whatever it would take to secure the future of his people.

Life has its fair share of surprises and shocks.  When challenges strike, it’s tempting to see your problems through the eyes of number one.  ‘Why is this happening to me?’ you ask, as the feelings of self-pity begin to overwhelm you.  But oftentimes, you don’t have the luxury to wallow in your sorrow.  Or to curl up into a ball and become invisible.  There are people depending on you, and they need you now more than ever.  There’s no time to think about how this is affecting you.  Your loved ones need your strength to carry them through the storm.

Maybe you’ve been laid off from work.  All you want to do right now is pull the covers over your head and escape from the world.  Maybe for a day or two.  Or a year.  Who knows?  But that’s not going to help you or your dependents.  They need you to pull yourself together and start looking for the next opportunity, as quickly as possible.

Or perhaps the latest downpour caused heavy flood damage, with water seeping into your house foundations.  You’re feeling really sorry for yourself.  You worked hard on creating the perfect basement, and now it’s all ruined.  Sure, the insurance will pay for it, but it will take months of hassle to get things back to the way they were.  Why shouldn’t you just be allowed to hide away and avoid dealing with the problem?  And so once again, you curl up and hope to disappear, with the hope that the damage will magically be all gone when you wake up.   But life doesn’t work like that.  The water isn’t going to pump itself out.  You need to pull yourself together for the sake of your family and find the inner strength to deal with the crisis.

Or maybe it’s a work setback.  Your largest client has just pulled their account.  You could have one too many and become a useless wreck.  But as department manager, your team needs you!  Now more than ever, they need you to show leadership, to rise above the challenges, and declare your commitment to forging ahead to bigger and better opportunities!

There were times in his life that even Moshe was at a loss as to how proceed.  Most people would have just thrown their hands in the air.  But Moshe was our greatest leader, precisely because his self-pity didn’t last beyond the initial moment of shock.  He immediately pulled himself together and acted as a leader should.

You are a leader.  You don’t have the luxury of taking time out to wallow in self-pity.  Too many people are relying on you, whether family members, team members, colleagues, or community members.  May you always find the inner strength to gird your loins and lead the way through the storm!
Posted by Rabbi Daniel Friedman at 11:22 AM