Take it slow and leap into leadership! 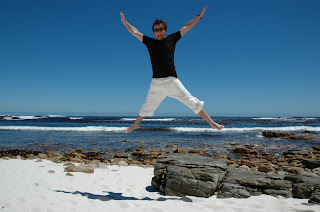 Following years of incessant corruption, the Almighty is ready to destroy Sodom.  Pitying His beloved Avraham, however, He pledges to save our patriarch’s nephew, Lot, and his family.  He dispatches angels to extract them.  They arrive promptly at Lot’s home, and sternly warn Lot and his wife of the impending destruction.  Upon hearing their words, Lot’s wife decides to pop out momentarily to ask the neighbours if she can borrow some salt.

Now, going down the street to borrow salt is not like borrowing apples.  Presumably the first neighbour she encountered would have had salt to lend her.  Nevertheless, she continues on to the next neighbour, and the one after that, and the one after that.  How much salt did she need already?  Her true intentions, it would seem, were to use the opportunity as a ruse to share the news about her guests and their proposal.  Before long, the entire city has heard about the angels, and every one of the townsfolk is clamouring around the house trying to break the door down to attack these unwelcome visitors.

Lot tries to calm them down, but to no avail.  Eventually, the angels reach out and pull Lot into the house before smiting the townsfolk with blindness.  The next day, they gather the family together and hasten them out of the doomed city.  Knowing the trauma of witnessing the devastation, they caution the family against looking back behind them.  But Lot’s wife cannot control herself.  She peeks over her shoulder and is immediately transformed into a pillar of salt.


The Sages taught: One who is asked to lead services (volunteer chazan) should refuse. And if he does not refuse, he is like cooked food without salt. However, if he refuses too much, he is like cooked food that was ruined by over-salting. So how should he act? The first time he is asked, he should refuse; the second time, he should vacillate; the third time, he should stand up and go to lead. The Sages taught: Three things are harmful in excess, but beneficial when used sparingly: yeast, salt, and refusal.

It must have been an enormous decision for Lot and his wife to make.  Two strangers appear and ask you to uproot your family from your home and community, and leave town at the crack of dawn the next day.  It wasn’t unreasonable of her to seek a pretext to get a second opinion from her neighbour.  The problem was, however, she didn’t stop after talking it over with one friend.  She kept going from door to door to mull over the decision and discuss the matter with anyone who would listen.  The Gemara teaches that a pinch of salt is okay.  But too much salt ruins things.

Lot’s wife’s initial hesitation makes sense.  Such a request requires a little bit of hesitation and refusal.  But then she should have heeded the Divine mission presented to her and accepted the charge of the angels.  Continuing to refuse was akin to adding more and more salt.  And so when she finally left Sodom and still couldn’t resist the urge to look over her shoulder and revisit her decision, she transformed into a pillar of salt.  There’s only so much salt one can add to one’s pot – so much hesitating and refusing to move forward – before the entire pot is no longer salted food, but salt itself.

Throughout our lives, each of us is called upon to lead in various capacities.  On the one hand, you need to master the art of saying ‘no’.  If you jump up at every opportunity, you’ll never accomplish anything serious.  You will become a jack of all trades, a master of none.  Having your hand in too many ‘pots’ means that nothing will be accomplished.  But on the other hand, you also need to master the art of saying ‘yes’.  If you find yourself refusing every leadership opportunity or role of responsibility that present themselves, or spending too much time thinking about such decisions, success in life will simply pass you by.

The Etz Yosef explains that initial refusal of a leadership position demonstrates that you feel that you are not worthy enough to lead them.  Such humility is appropriate.  Continued refusal, however, demonstrates your belief that they are not worthy enough for you.   If people need your leadership and you continually refuse to take the reins, you might think that you’re not talented enough, but their insistence would suggest that they think otherwise.  Clearly, they believe in you.

Your continued refusal to respond to their invitation to lead implies one of two things.  Either it shows an element of arrogance on your part, symbolized by the yeast in the Gemara’s adage.  Yeast puffs up a dough.  Allowing the dough to rise a little is often necessary for leadership purposes, as a leader needs to hold themselves well.  But excessive yeast – lording it over people – ruins the bread.

The other implication might be that you are simply shirking responsibility and you will never grow as a person. This attitude and approach is represented by the salt.  The only purpose for over-salting is to preserve food.  But preserved dishes stay in their present state for lengthy periods of time.  A healthy individual is constantly on the look-out for growth opportunities, never satisfied to remain in a mode of stagnation.

It’s okay to think things over.  If you respond to every opportunity immediately, you’ll remain like a cooked dish that hasn’t been salted.  It tastes bland, as most of life will end up being horizontal moves, at best.  Add the salt, take the time to consider the matter, and choose the right leadership opportunity.  But at the same time, if you keep thinking and thinking, you’ll never move forward.  Too much salt spoils the dish.   May you pause to give opportunities that arise in life due thought and consideration, but always be ready for the next big thing that will transform you from a pillar of salt to a pillar of the community!
Posted by Rabbi Daniel Friedman at 9:59 AM