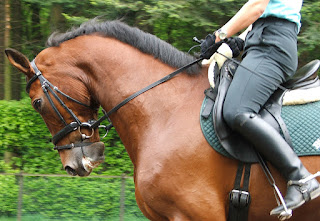 Ben Dama once inquired of his uncle, Rabbi Yishmael, “I just dreamed that both my jaws fell out.  What does it mean?”
“Two Roman soldiers have conspired against you,” replied Rabbi Yishmael, “but before they had the chance to carry out their plot, their carriage veered off the edge of a cliff.”
Bar Kappara asked Rebbe, “I just dreamed that my nose (aff) fell off. What does it mean?”
“Fierce anger (charon aff) has been removed from you,” he replied.
He said to him, “I dreamed that both my hands were cut off.”
“It means that you will not require the labour of your hands,” he responded.
He said to him, “I dreamed that both my legs were cut off.”
“That means that you will ride on horseback,” came the reply.
“I dreamed that they said to me: You will die in Adar and not see Nisan.  Do you know what that might mean?” was Bar Kapara’s final query.
Rebbe replied, “You will pass from this world in complete honour (Adarusa), and not fall to temptation (Nisayon).”

This thought pattern is not only true of the world of our nocturnal states of consciousness, it happens in the real world too.  A popular chasidic adage advises, ‘Tracht gut, vet zayn gut’ – think positively, it will be positive.  The right attitude can bring positive results while negative thoughts may become a self-fulfilling prophecy.

The process happens both over the short-term and the long-term.  Let’s talk about the short-term prospects of positive thinking.  Every day we face challenges in our lives.  They may be work-related, family-related, health-related.  While maintaining an optimistic attitude will not guarantee a positive outcome, it will definitely go a long way to improving the chances.

Maybe you’re dealing with a crisis at work.  A major customer has threatened to pull their account.  You could spend all day and night worrying about the income shortfall if they were to leave.  But the more you worry, the more you will convince yourself of the inevitability of the loss.  And once you’ve convinced yourself that it’s inevitable, you’ll start talking like that to your staff.  They, in turn, won’t respond quickly to the needs of the customer.  And voila, before you know it, the customer has indeed left.

Now let’s consider the alternative scenario.  The customer calls to say they’re pulling their account.  You maintain an optimistic outlook, hoping and praying that they’re just having a bad day or that they’ll go to your competitor and realize that the service you offer is unparalleled.  ‘Why so cheerful today, Bob?’ your secretary asks.  ‘Because we’re about to keep a big customer,’ you reply.  And sure enough, company morale is maintained, the customer regrets their rash decision and you’ve reached a wonderful conclusion to the saga.

There is another path.  True, the doctor told you that ninety percent of people don’t survive this terrible malady.  But why would you resign yourself to being one of the nine out of ten that don’t make it?  In every other aspect of your life, you pride yourself on being a top ten percent achiever.  Why should this situation be any different?  You are a winner and ten percent of people survive!  That positive perspective will not only improve the quality of your life today, it will increase your body’s ability to build the antibodies required to heal.

Let’s now turn to the benefits of long-term positive thinking.  Rabbi Yehoshua and Shmuel were able to manipulate the Caesar’ and the king’s dreams by convincing them to think a certain way.  We all have dreams, dreams of the future, dreams of how we see our lives playing out.

But every dream is a mixture of reality and imagination.  Reality is based on what we know for certain.  Imagination is based on the possibilities.  On the one hand, if every time you start thinking about the future, you let reality get the better of you, your life will end up being pretty dull, uneventful, and path dependent.  On the other hand, if you let your imagination run wild, unfettered by the constraints of reality, you will not accomplish anything useful in life, because the possibilities and choices are endless.  The key to success in life is to strike the right balance between reality and imagination.

Even though our dreams must be rooted in reality, the Gemara demonstrates that a lot of the reality depends on our attitude.  With the right perspective we can alter our reality.  Rabbi Yehoshua ben Chananya implanted a thought into the Caesar’s mind.  The more he thought about it, the more it weighed upon his mind.  Until eventually, it materialized in his dreams.  Thinking a certain way became so vivid and real that it became a self-fulfilling prophecy.  But if it works to produce a negative outcome, it most certainly works to produce a positive outcome.

If you keep telling yourself that things will turn out badly, then they probably will.  But if you keep telling yourself that your dreams will come true, then you increase the odds of success exponentially.  Based on these two contrasting approaches, every time a challenge comes your way, one of two things may happen.  The individual with the poor attitude will view the matter as a crisis, an insurmountable mountain.  The individual with the optimistic outlook will overcome the issue, because they know that it’s just a bump in the road.

But, let’s be honest, how can we simply fool ourselves into believing everything’s going to be okay, when clearly it’s not?  When you see or hear things that suggest that things are not looking good, how is it even possible to maintain a positive outlook?   The answer lies in the visions that Ben Dama and Bar Kappara experienced.  They were awful.  There appeared to be no way to see those visions positively.  And yet Rabbi Yishmael and Rebbe managed to turn them around, reinterpret the stimuli, and plant positive thoughts in their friends’ minds.  There is hardly a situation in this world that cannot be viewed and examined from a different angle.  The key is to take a step back or seek advice from others who can size up the matter objectively, and find the alternative angle.

Much of the reality of our lives is created by our own thinking.  Positive thinking produces positive outcomes. And even when the end of the story isn’t quite the way we’d hoped for, with the right attitude, at least we get to spend the time in the interim with a love and zest for life, making the most of every minute.  May you always manage to see the positive in every situation and may all your dreams come true!
Posted by Rabbi Daniel Friedman at 7:28 AM