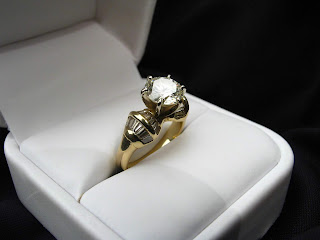 Yankel was a poor tailor who lived in Pinsk.  He sewed day and night but could never seem to make enough money to feed his family of ten.  One day, he learns of an island far away, where instead of sand, the seashore was full of diamonds.  And so he sets off to find his El Dorado.

After months at sea, he finally arrives.  Sure enough, the streets are paved with diamonds.  He fills his pockets, his knapsack, his hat.  He can’t believe how rich he has become.  He then sets off to the nearest restaurant and orders the finest cuisine.  At the end of the meal, he produces a huge diamond from his pocket to pay.
‘I don’t think you understand,’ says the waiter, ‘diamonds are worth nothing on this island!  The currency here is fish!’

Crestfallen, he empties his pockets and sets out to learn how to fish.   He’s a quick learner and in no time manages to become quite wealthy as a fisherman.  After amassing a small fortune, he sends word home to his wife to put a down payment on a mansion, because he is on his way back with fabulous wealth.

He arrives home with three boatloads of fish.  By now, they’re pretty smelly, having been in the hold for months.  Undeterred, he goes to the bank and offers to complete payment on the house with his spoiled fish.
‘Pardon me,’ the bank manager looks at him incredulously, ‘but why would I want your smelly fish?’

Realizing his foolishness, the poor tailor walks away completely distraught.  He gets home, takes off his clothing, he’s getting ready to go to bed, when he hears a clunk.  Out of his pocket has fallen one lone diamond that remained from his original gathering!  His wife has never seen anything so beautiful.  She picks it up, runs to the bank; and with that single diamond, she pays off the entire new house!

Mishnah: If one has eaten and forgot to bentch, Beis Shammai says he must return to the place where he ate, and proceed to bentch there, while Beis Hillel says that he may recite it in the place where he remembered.
Gemara: Beis Hillel said to Beis Shammai, “According to you, if one ate at the top of a tower and forgot to bentch and then descended, should he return to the top of the tower and bentch?”  Beis Shammai replied to Beis Hillel, “Well, according to you, if one forgot a purse at the top of the tower, would he not go up to retrieve it? And if he would ascend for his own sake, does it not go without saying that he should do so for the honour of Heaven?!”

The Chofetz Chaim (Krohn MS 253) offers the story of Yankel the tailor as a parable about mitzvos in this world.  There are few opportunities to gather diamonds – mitzvos – in Heaven.  And so the soul travels a great distance to a faraway island called Earth.  In this mythical place, the streets are lined with diamonds.  Everywhere you turn, there’s another opportunity to do a mitzvah – to help a needy person, to say a few verses of Tehillim, and so on.  And yet these diamonds are so plentiful that nobody appreciates their value.  They appear to have no real currency.  Instead, people trade smelly fish, which symbolizes the value of material wealth relative to the value of mitzvah-diamonds.  And the longer we are here on this island, the more we forget the value of a diamond and place more and more value on the fish.

After 120, we return to Heaven, proudly displaying all the fish we’ve amassed.  Only to be told that fish have no currency in Heaven.  Only diamonds.  Realizing how many opportunities we missed, we feel ashamed before the Heavenly court.  However, as we are changing into our angelic robes, a diamond or two will fall out of our pockets, for there is no individual who has not performed a mitzvah in this world.  At the time, they had no idea what an incredible impact they were making with their actions and the true value of their seemingly small spiritual acquisition!

We’re often faced with the opportunity to do a mitzvah, and we say to ourselves that it’s just too much of a hassle.  Beis Shammai offers us a helpful framework to keep things constantly in perspective.  If we would only have an inkling of the value of mitzvos, we would be running around all day, every day, to perform as many mitzvos as possible!  Says Beis Shammai: Every time you find yourself lacking the motivation to go the extra mile to do a mitzvah, ask yourself, ‘If I’d forgotten my wallet, would I bother going back to look for it?’  If you would, then most certainly you should be running to fetch a mitzvah opportunity!

I find this advice very useful when I’m on holiday and the shul isn’t around the corner.  Does G-d really expect me to take a cab to the other side of town to daven with a minyan?  And then I tell myself that it’s not about what G-d expects or doesn’t.  The real question is: How much do I value this mitzvah?  Surely, it’s considerably more valuable than the ten quid the cab cost!  Money comes and goes, mitzvos are for all eternity!

Often in life, you find yourself lacking motivation to pick up those diamonds.  You really can’t be bothered.  You look at others who appear to have all the energy in the world.  Somehow, they’re always on the go and able to achieve so much. And you say to yourself: I know I could accomplish amazing things, but I struggle with laziness.  It’s not really my fault, it’s just my character.

Rabbeinu Yonah lived in 13th century Spain.  A Torah giant, he was a motivational speaker par excellence.  In his treatise on the subject of laziness, he puts it candidly:  Stop thinking you’re special.  That you’ve been uniquely ‘blessed’ with a lazy nature.  That’s not the case, says Rabbeinu Yona.  Everyone is lazy, from the average joe to the greatest rabbi.

The Gemara concludes with a powerful story:

Rabbah bar bar Chana was once travelling with a group of people.  He ate lunch, but then forgot to bentch (Grace After Meals). Realizing that the right thing to do was to return to the place he had eaten, he found himself in a bind.  “What should I do?” he thought to himself, “If I say to the others, I need to go back to bentch, they will say to me, ‘Say it here.  Wherever you bentch, G-d can hear you!’ I had better tell them that I have forgotten a golden dove.”  And so that’s what he did and they waited for him before travelling any further. He quickly headed back to the diner they’d stopped for lunch and proceeded to bentch.  Lo and behold, there right next to him was a golden dove!

Did he find a physical golden dove?  Or is the Gemara narrating the original parable of the diamonds?  While his fellow travellers may not have appreciated it, Rabbah understood that the mitzvah he was going back to retrieve was worth far more than the value of any golden dove.

It’s not easy to motivate ourselves to do mitzvos.  We don’t see their true value.  It’s not that we don’t care to.  It’s just that laziness is our default position a lot of the time.  May you overcome the inner tempter and fill your pockets – and suitcases – with diamonds!
Posted by Rabbi Daniel Friedman at 2:48 AM