It's time for us to brush up on our algebra 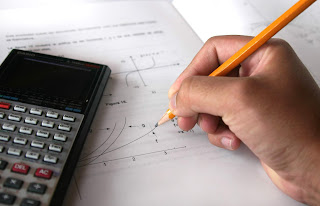 One of our most memorable and beloved prophets was Yeshayahu (Isaiah).  His words have brought comfort to the world as we look forward to a future of peace and global brotherhood.  Isaiah famously prophesied that at the end of days, “they will beat their swords into ploughshares,” and the “wolf shall live with the lamb.”  While Yeshayahu came from an aristocratic family, he had a unique ability to connect with all the people.  Never standing above them, he felt their pain, and always included himself in the collective of the nation of Israel.  Unsurprisingly, he is the prophet we have turned to, throughout our centuries of persecution and challenge, for hope and strength.

When the situation of the Jews of Persia appeared bleak, Mordechai was looking for a sign of hope.  Walking down the street feeling completely downtrodden, he encountered a group of schoolchildren leaving class.
“What did you learn today?” he inquired of them.
“We learned the verse in Isaiah, ‘They contrive a scheme, but it will be foiled; conspire a plot, but it will not materialize, for Hashem is with us.’”

Moments later, Mordechai met Haman.
“Why are you so happy?” the wicked Persian minister demanded to know.
“Hashem is with us,” replied Mordechai with the confidence imparted to him by the great Yeshayahu generations earlier, a prophet who was always, first and foremost, a man of the people, from great to small.

Rabbi Leon of Modena (Haboneh) elucidates Shmuel’s message: One must never exclude oneself from a message directed towards the collective, whether the message is positive or negative.  Excluding oneself gives the appearance of arrogance.  Our Gemara provides an example of a positive instance whereby one should avoid excluding himself.  If the leader were to instruct the others to bless Hashem, it might sound like he is suggesting that they must bless, but that he is above such obligations.  Therefore, he must always say, ‘Let us bless,’ in order to include himself in the group.

Rabbi Leon then expands upon Shmuel’s teaching with an incredible presentation of the other side of the coin.  Not only must you include yourself in a positive declaration, the same is true regarding words of criticism.  He offers two examples where our greatest prophets included themselves in their rebuke of the nation.  Prior to their entry into the Promised Land, Moshe declared to the Children of Israel (Deut.12), “You shall not do all the (idolatrous) things we are doing here today.”  Similarly, Yeshayahu chastised the people (Isa.1), “Like Sodom we were, like Gomorrah, we appeared.”

Maybe you’re a business manager.  Every boss needs to critique the performance of their employees on occasion.  One approach is to point fingers and chastise them for their shortcomings.  But it would only leave everyone feeling upset and under-appreciated.  An alternative approach is to include yourself in the message.  “Dear members of this awesome firm, I come before you today to share some of my personal misgivings.  I’ve been feeling a little frustrated with myself lately.  Our productivity has slowed a little in recent months, and I’ve been thinking that we could all be doing just that little bit more to increase our overall output.  What do you all think?”

Think about some of the conversations you have with your children.  How should you approach the topic of their dedication to homework and scholastic performance?  One approach is to give them a long lecture about how they’re not spending enough time studying, because they’re always on their phone or watching TV.   Another approach is to talk to them about striking the right balance between work and play.  “I’ve been thinking about the amount of time we all spend on our phones each evening.  I know that, as a family, we’re smarter than the average Joe.  How about we have a phone-free and TV-free zone each evening from seven to nine.  During that time, we can study, or read a book, or just talk to one another.  What do you think about that?”

Let’s take the matter a step further.  It’s vital that our children feel that we take their subjects as seriously as we claim.   When your child comes over to you for help with an algebra problem and you respond with a dismissive, “I have no idea,” what message does it send to them?  You might be thinking, “Boy, it’s been a long time since I studied mathematics.”  But what they hear is that the material is not important enough to sit down and take the time to figure out.  If it’s not important to you, why should it be important to them?  The right response is, “That’s a really good question.  Let’s try and figure it out together.  I might not recall exactly how to solve the problem, as it’s been a while since I dealt with this particular area of mathematics.  But it’s really important to me.  If we can’t figure it out between the two of us, let’s get a third person to help us with it.”

And if that should be our attitude towards algebra, it goes without saying that it should be our attitude towards our children’s Jewish studies.  You know how strongly you feel about giving your children a solid foundation in Judaism.  But it’s important that they know how you feel as well.  It can be challenging to get them out of bed on a Sunday morning and into cheder (Sunday school).  But if it’s a family experience, then they’ll respond more enthusiastically.  “Jewish education is an important value to our family.  When you get home, we can’t wait to hear what you’ve learned today.  And you kids might not realize it, but we haven’t ever stopped our Jewish learning.  One of the important parts of our day is learning a little lesson for life from the Daf Yomi!”

When the critique is about ‘us’, not only does it make things gentler and more likely to be accepted, it also makes us think about the areas of our life that we could also do with a little improvement.  May we always work together to grow in every area of our lives!
Posted by Rabbi Daniel Friedman at 10:51 PM