Do the clothes make the man or does G-d not care? 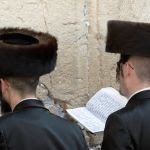 Mazal tov to Rabbi Moshe Hauer, the new Executive Vice President of the Orthodox Union.  A successful pulpit rabbi from Baltimore, for many years Rabbi Hauer has earned a reputation as a ‘rabbi’s rabbi,’ having trained and mentored so many up-and-coming rabbis in the world today.

One idea that Rabbi Hauer likes to share with young rabbis is his vacation attire.  While he admits that he does not always wear his rabbinic garb when holidaying abroad, he nonetheless never leaves home without a tie.  Because three times a day, he is obligated to daven (pray).  No matter where he finds himself, even if there are no other Jews for miles around, he will not begin to daven until he dons his white shirt, tie, and suit jacket.

But, honestly, are all the formalities really so necessary?

Mishnah: One should only rise to pray with a reverential attitude.  The early pious ones would contemplate for an hour and then pray, in order to direct their hearts to their Father in Heaven.
Gemara: What is the source of this principle?  Rabbi Yehoshua ben Levi taught from here, “Bow to Hashem in beautiful (hadras) sanctity.”  Do not read the word as ‘hadras’ (beautiful), but as ‘chardas’ (reverent).  Why must we reinterpret the reading?  Perhaps the intent was always actually to beautify the prayers, just like Rav Yehuda would do.  He would dress in the finest attire and only then pray.

Every occasion has an appropriate dress code.  Dinner invitations indicate the manner of attire the event calls for: formal, casual, smart casual, cocktail, the list goes on and on.  And then once-in-a-lifetime, you are invited to an event that needs no explanation.   When you open that letter inviting you to dinner at Buckingham Palace or the White House, you don’t start wondering whether you could get away with a pair of designer jeans and your fanciest running shoes.  The attire is not stated on the invitation, because it doesn’t need to be.  Everyone knows that you dress in your finest garments for a meeting of such stature.

If that’s how we would show up to meet a mortal monarch or leader, it goes without saying that we must be appropriately attired when we meet with the King of kings, the Holy One blessed be He.  It’s not that Hashem cares whether or not your shirt is tucked in.  It’s the attitude you are maintaining towards this preeminent meeting that makes all the difference.

Many businesspeople have the luxury of not needing to go into the office every day.  Some days they can work from home, using their computers and mobile phones as remote office tools.  And yet, they will still put on a suit and tie.  Why?  Because the clothes maketh the man.  Not just in terms of the way others perceive you, but in the way you perceive yourself.  When you’re dressed in a suit and tie, you suddenly find yourself sitting more upright in the chair.  That, in turn, leads to a more formal posture and presentation when you make the call to the potential or current client.  Long before Skype, it was not difficult to discern whether someone was sitting in a pair of shorts by the pool or wearing a suit and tie behind a desk, simply by the tone of their voice.

Likewise, when you prepare yourself for prayer by wearing appropriate clothing, the entire tone of the conversation between you and G-d changes.  You’ve tangibly prepared for this ‘meeting.  You’re now going to put a little more thought and effort into what you’re saying.

Nobody is suggesting you should adorn yourself in a tuxedo or ball-gown dress.  Your daily communication with G-d is not meant to be formal and stiff.  At the same time, however, it mustn’t be casual and nonchalant.  Rav Yehuda was able to strike the right balance, ensuring that his prayer attire was ‘beautiful’ and appropriate for the important event called Shacharis (morning service).

Prior to becoming a pulpit rabbi, we lived in Brooklyn, New York, where it was common practice to have a Shabbos shluf (siesta) and then not bother to put your tie back on for Mincha (afternoon service).  And so, while everyone was still adorned in their suits, hats, and shtreimels, there was scarcely a tie to be seen for miles around.  As a rabbi, I continued this ‘minhag’ (norm), thinking little of it.  But after a while, I began to notice that many people would arrive on Shabbos afternoon in jeans and t-shirts, looking very casual and laidback.  I was then that I realized that lowering my standards of Shabbos-attire had a ripple-effect.  If the rabbi didn’t need to wear a tie, then why should I bother with a button-down shirt?

Every occasion has its mode of appropriate attire.  When the clothes themselves maketh the man, it obliges you to reimagine the gravity of the moment.  May you treat the Shabbos queen with reverence and respect, and may you greet the King of kings in a state of beautiful sanctity!
Posted by Rabbi Daniel Friedman at 1:13 PM