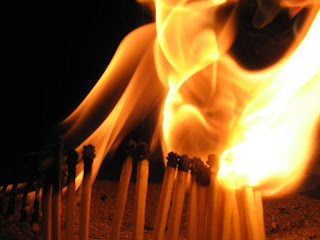 What is the most important human invention of all time?  The automobile?  The telephone?  The aeroplane?  The internet?  None of these would have been possible were it not for the first human invention: fire.

After Six Days of Creation, G-d rested on the seventh.  Following His final creation of humankind, Adam and Eve spend their first Shabbos enjoying the world they had entered.  But then Motzei Shabbos (Saturday night) arrives and it gets dark.  The first couple fumbles around, trying to find a way to see one another.  All of a sudden, they are imbued with a flash of inspiration and Adam rubs two stones together.  A spark ignites and a fire is started.

To commemorate the very first – and arguably, the most important – human invention, each Motzei Shabbos at the Havdallah service, we light a candle and bless Hashem for creating the lights of fire. But is that accurate?  Did G-d create fire or did Adam?  In our Talmudic story, it appears that Adam created fire.  Indeed, the Havdallah tradition each Saturday night commemorates Adam’s achievement on the very first Saturday night.  Moreover, if G-d was the creator, fire should have appeared during the Six Days of Creation!  Who then created fire and when was it created?

According to the Vilna Gaon (SE), the debate between Beis Shamai and Beis Hillel concerns whether we are blessing Hashem for the fire that we are enjoying right here and now or for the very first fire that He created.  Rav Yosef concludes that both schools of thought agree that their respective formulae refer to the original fire that G-d created.  Why then does Beis Hillel insist on a verb form that would seem to imply the present tense?

But, let’s think about that notion for a moment.  How many of us are actually able to create anything?  When we boil the kettle, undoubtedly we bring about a new substance, called hot water.  But did we really create it?  Of course not.  All we did was to reshape it from cold water to hot.  Hashem created the water, and we applied certain physical pressures to it – in this case, heat – and the water boiled.

When Adam created fire for the very first time on that first Motzei Shabbos, did he actually create it?  In reality, its potential existed in the two stones prior to Adam’s decision to rub them together.  Hashem had already created fire during the Six Days of Creation.  Humankind, however, had not yet discovered the fire hidden in nature.  When Adam performed the creative act of producing fire, he was not actually creating anything.  He was merely discovering.  Nevertheless, since it appears as if he created, it is forbidden on Shabbos.

Both Beis Shamai and Beis Hillel recognize that everything in this world that humans have created, or invented, is not an actual creation, but a discovery of one of G-d’s creations that He buried deep within nature, until the time would be right for us to discover it.  Thomas Edison didn’t create the lightbulb.  He might have invented it, but the true definition of invention is the discovery of a creation that the Almighty hid within nature during the Six Days.  Every light in this world was already ‘created’ by Hashem.

The difference between the Havdallah bracha formulae offered by Beis Shamai and Beis Hillel pertains to how we view each modern invention.  Beis Shamai is not particularly moved and amazed by our human ‘creativity’. Every invention, in their mind, may be traced to the original singular flame of fire that G-d hid within the rock that Adam discovered.  When we light the Havdallah candle, we’re reminded that everything comes from that light, hence the formula “Who created the light of fire.”

Beis Hillel, by contrast, is inspired by every manifestation of the original flame, as it has developed in each era of human existence.  When they see the Havdallah flame, they see flames that have been created throughout the millennia of human creativity and continue to be created.  True, all of our incredible inventions emanate from the original flame that G-d created.  Nevertheless, most human beings cannot relate to the multiple steps that connect a flint stone to an electric car.  And so the formula is that G-d “creates flames of fire,” in the present and plural tense.  The Havdallah candle reminds us that every human invention is a Divine creation.  G-d inspired and continues to inspire human beings to discover His creation of yore, hidden deep within nature.  Havdallah is our weekly opportunity to express our appreciation to Heaven for the wonders of modern technology.

The Almighty created us, and then called upon us to become His partners in creation.  When we strive to discover the secrets He has hidden in nature, we fulfil His vision.  While it might not be strictly accurate that we are creators, He nonetheless wants us to feel like we are joining Him in the act of creation.  May you merit to partner with G-d while always acknowledging that every human invention was already prepared by Hashem during the Six Days of Creation!
Posted by Rabbi Daniel Friedman at 9:49 PM