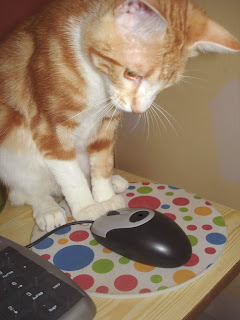 Are cats just like us?  The wise men of Egypt would often debate philosophy with Maimonides.  One philosophical dispute concerned the difference between human beings and the animal kingdom.  According to the wise men, we are merely quantitatively different from beasts.  According to Maimonides, we are qualitatively different.  While Maimonides believed that animals could never be compared to people, the Egyptians felt that, with the right training, an animal could assume human traits.
Determined to prove their position, one day they invited Maimonides to a feast.  He entered the hall and was ‘greeted’ at the front by a cat standing on its hind legs.  The cat showed Maimonides to his seat, and proceeded to pour him some wine.  The Egyptian wise men looked on with pride, as their protégé demonstrated their point.  Maimonides, however, smiled at them and pulled a mouse out of his pocket and set it loose.  All of a sudden, the cat ‘forgot’ that it was meant to be acting like a human.  It dropped the bottle of wine, fell down onto all-fours and began to scamper after the mouse.

Regarding manure that was passing by, Abaye says, ‘It is permissible to recite the Shema in its presence.’  Rava says, ‘It is forbidden to recite the Shema.’
Rav Papa says, ‘The mouth of a pig is like passing manure.’
‘Isn’t that obvious?’ asks the Gemara.  (Rashi explains: Pigs always have filthy mouths).
The Gemara answers: The meaning is, even if it has just emerged from a river (and cleansed itself).

Proverbs (11:22) teaches, “Like a swine with a gold nose-ring is a beautiful woman of poor taste.”   No matter how many gold rings you place on a swine, it will still be a swine.  Similarly, Rav Papa teaches that a swine that has emerged from a river remains a swine.  Outwardly, it might appear to be clean and beautiful, but its inner essence has not changed.  You can clean up a pig, dress it up in the finest garments, and adorn it with the finest jewellery, but it will still be a pig.

King Solomon’s message in Proverbs is that our internal character must match our external appearance.  We all have our personal mice, explains the Alter of Kelm.  Under ordinary circumstances, we are able to act calm, cool, and collected.  But all we need is one little mouse to be let loose, and we lose control over ourselves. Because we’ve never truly dealt with our mice and transformed our internal character.

For some of us, it might be anger.  For others it may be lust.  For yet others it may be arrogance.  We’re able to act in a refined manner.  We look like we’ve got it all under control.  And then, that mouse is unleashed.  And you’re a different person entirely.

Let’s say your mouse is anger.  For the most part, you do your best to maintain your calm composure.  But then someone says something that you don’t like, and you lash out at them, to the astonishment of all, including yourself.

Maybe your mouse is lust.  Generally, you’re pretty good at controlling your urge to act on your desires.  And then an irresistible temptation comes your way.  And you transform from a person into a cat.  That’s what happens when you haven’t truly refined your internal self and conquered your lustful character.

Or perhaps your internal cat is the trait of arrogance, or pride.  You’re able to maintain a façade of humility.  Until suddenly someone pushes your buttons and you feel you’ve been disrespected.  Your true inner being emerges, and it becomes clear that you weren’t the humble individual you pretended to be all along.

It’s not easy to refine our inner selves.  But we can.  Unlike a swine or a cat, human beings have a special Divine gift.  You were placed on this Earth with a unique mission.  To fix the person into which your soul was placed.  If you’re dealing with a challenging character trait, know that the Almighty has clearly defined your mission to you.  He has sent you here to fix that trait and transform your character.

How you do that depends upon the ‘cat’ you are dealing with.  If your inner cat is rage, a good step towards transformation is to train yourself not to respond to an agitator for 24 hours.  Sleep on the matter, think it over.  And then respond to the person or situation once you’ve taken control of your emotions and you can deal with the matter rationally and sensibly.

If your inner cat is lust, you need to set up fences to avoid any contact with any temptation that might unleash your impulses.  If your inner cat is arrogance, try spending five minutes a day learning the sections of Mussar (ethical Torah teachings) that speak of the smallness of man in this great universe and our lowliness before the Almighty.  Over time, you will see that your character will transform.  What began as an external act can, and will, become essential to who you are.

You are not a cat or a swine.  You are a human being created in the image of G-d.  You have the ability and the duty to transform yourself into the prince and princess of our Father, our King.  May you find your inner cat and be successful in your self-transformation!
Posted by Rabbi Daniel Friedman at 8:32 AM