Keinehora: Does the Evil Eye affect you? 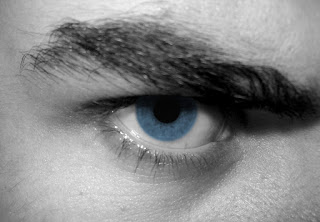 Yosef was incredibly handsome.  As he walked down the street each day, all the young ladies in Egypt would talk about him and compete to catch a glimpse of his beauty.  But one woman knew that he would be her prize alone.  At the time, Yosef was working for Potiphar, and his wife had become obsessed with him.  Each day, she would make advances, making it really difficult for Yosef to concentrate on his job, let alone his spirituality.
One day, he couldn’t take the pressure anymore and decided that maybe he would give in to her desires.  Suddenly, he envisioned his father gazing down upon him and showing him the future breastplate of the High Priest.  The adornment would have twelve stones, one for each tribe that would descend from the twelve sons of Yaakov.  But, alas, there was one stone missing!  ‘If you go down this path, you will remove your descendants from the family of Israel!’ was the message he understood, loud and clear.

What is the meaning of ayin hora?  Heaven has determined what we are entitled to receive in this material, physical world.  As human beings, however, many of us are not satisfied with what Hashem has provided us.  And so we look around and begin to desire things that don’t belong to us.  The more we gaze at these distractions, the more we desire them.  And gradually, our eyes become so fixated on these things that we become obsessed.

That’s what happened to Potiphar’s wife.  First, it was just a little peek at Yosef, when she thought he wasn’t watching.  But the peek became a gaze, which became a fixation, and then an obsession.  Day after day, he resisted the urge to return her glances, but it was all too much.  It reached a point where Yosef thought that he could no longer control the temptations.  But by focusing on the future, he was able to overcome his emotions.  He saved himself from the clutches of the ayin hora, to which he had almost become victim.  And in doing so, he bequeathed to his descendants a special power over the force of ayin hora for evermore.

The same ayin hora force that tempts a person to look at and become fixated upon another human being that does not belong to him exists regarding other people’s property and lifestyles.  It starts with a simple glance in another person’s direction, but before one knows it, they’re obsessed with what the other person has and they don’t.  Ayin hora, the evil eye, is the power of jealousy, a force that can be so destructive.  People look at what you have and they become so envious that they will act irrationally to bring you down.

The Gemara teaches the secret to avoiding others’ jealousy.  God conducts His disciplinary activity in a system of ‘measure-for-measure,’ meaning that reward and punishment correlate with our actions.  If you allow your ayin hora to stray – and focus on things or people that don’t belong to you – he allows others to focus their ayin hora on you, becoming jealous of you, often to the point of obsession.  But if you’re careful not to create any ayin hora, controlling your eyes from wandering and indulging in other people or property – not even just a peek, let alone to the point of lust – then Hashem will guard you and your property from the ayin hora of others.

In the twenty-first century, it’s not easy to resist the temptation to allow your eyes to wander.  Inappropriate imagery abounds.  And social media gives the impression that some people are enjoying such amazing lifestyles and material prosperity.  But a glance quickly degenerates into a gaze, a fixation, and ultimately, an obsession.  The more you control the urge to be overpowered by the ayin hora to indulge in things or people that are not your own, the more Heaven will control the urges of others’ ayin hora.  Their jealousy of your possessions, accomplishments, lifestyle, and family, will have no effect whatsoever.

Many of us have heard our grandparents employ the term ‘keinehora,’ as shorthand for ‘no evil eye.’  May you resist the lures of the enticing world around us, and may keinehora come your way!
Posted by Rabbi Daniel Friedman at 7:16 AM