Daven at home or at shul? (Brachos 8) 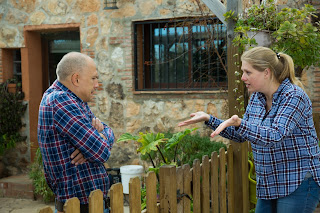 The synagogue had been struggling to get a morning minyan for some time.  Reb Zundel, the shul’s rabbi for over half a century, had taken to knocking on doors each morning, to encourage minyan attendance.  Arriving on the doorstep of a certain businessman, Mike, he was invited in with great kavod (respect).
“Mike’le,” asked the aged rabbi, “Why don’t you come to shul and daven with the minyan?”
“You know, Rebbe,” he replied, “I have a few daughters.  And so I believe it’s important for me to daven at home.  That way they’ll have the opportunity to see how a Jew davens with tallis and tefillin.  If I were to go to daily minyan, when would they ever see these integral prayer items?”
“Really?” Reb Zundel responded with a sigh, “did you ever consider bringing your little girls with you to shul?”

Rabbi Natan says: How do we know that the Holy One, blessed be He, does not reject the prayers of the congregation? For it is said, ‘Behold, Hashem despises not the mighty.’
The Holy One, blessed be He, says: If a man occupies himself with the study of the Torah and with works of charity and prays with the congregation, I account it to him as if he had redeemed Me and My children from among the nations of the world.
Resh Lakish taught: Whoever has a synagogue in his town and does not go there to pray is called a bad neighbour.

Davening in shul versus davening at home is incomparable.  When you daven at home, you’re davening all alone, not just physically, but also spiritually.  When you daven by yourself, the Almighty looks at you and says, “Let’s see, Chaim Yankel is asking for all these things.  Does he really deserve them?”  And He turns to the angelic accounting department for an income and expenditure report.

What happens when you daven at shul?  Hashem looks at the crowd and says, “You know what?  On the whole, they’re a pretty decent bunch.  I’m going to give them what they’re asking for.”  That’s the meaning of Rabbi Natan’s teaching.  While He might not heed the prayers of an individual, the prayers of a congregation are never rejected.

The Mishnah in Pirkei Avos teaches, “The world stands on three things: on Torah, on prayer, and on acts of charity.” True, these three are the pillars that uphold the world.  But our Gemara takes it a step further.  If you want to do more than simply maintain the status quo, if you want to actually redeem the hidden sparks of the Divine that have been scattered across the globe, you need to act cooperatively.  When you learn Torah, engage in charitable work, and pray together with a community, you transform the universe.  Why?  Because it takes much more energy to coordinate your efforts with other people.  It takes patience and flexibility.  It takes compromise and goodwill.  When you learn to work with others for the greater good, you make this world a better place for everyone, even for the Almighty Himself!

And that’s why an individual who has a shul in the area and chooses to daven at home is considered a bad neighbour.  Yes, they’re praying.  And they could be the most meritorious person on Earth.  But if they’re not willing to share some of that merit with the rest of the community, it means they’re not interested in making this world a better place.

If you want your prayers to go directly to Heaven, you need to go directly to shul!  Don’t worry if your merits are less than perfect, you will ride the wave of congregational goodwill as the Almighty looks down upon you with favour.  May you always be a good neighbour and make this world a better place!
Posted by Rabbi Daniel Friedman at 2:41 AM