CCTV makes it hard to sin 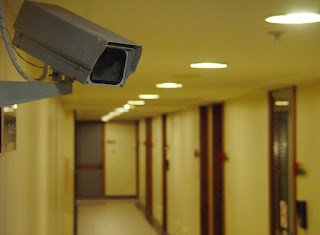 When Rabbi Yocḥanan ben Zakkai was on his deathbed, his students went to visit him. When he saw them, he began to cry. His students asked him, “Lamp of Israel, the right pillar, the mighty hammer, the man whose life’s work is the foundation of the future of the Jewish people, for what reason are you crying?”

Now they are leading me before the supreme King of Kings, the Holy One, blessed be He, who lives and endures forever and all time.  If He is angry with me, His anger is eternal.  If He incarcerates me, His incarceration is eternal.  If He kills me, His killing is for eternity. I am unable to appease Him with words and bribe him with money.  And I have two paths before me, one to the Garden of Eden and one to Purgatory.  I know not to which they are leading me.  Should I not cry?”

They said to him, “Our teacher, bless us.”
He replied, “May it be His will that the fear of Heaven shall be upon you like the fear of mortal man.”
The students asked, “But only that much?”
He said to them, “If only a person would attain that level of fear!  Know that when one commits a transgression, he says to himself, ‘I hope that no man will see me.’”

What were the students of Rabbi Yochanan ben Zakkai thinking?  Didn’t they realize that most people tend to fear being caught by their fellow men much more than by G-d?  After all, G-d sees everything, and yet people sin.  But if that same person would know he was being caught on CCTV, he would desist from acting inappropriately.  What part of their teacher’s cautionary blessing was difficult for them to comprehend?

The Chesed L’Avraham explains their bewilderment in light of the previous thoughts offered by Rabbi Yochanan.  He had just told them that heavenly punishment is much worse than earthly punishment.  The former is eternal, the latter temporary.  Why then would people fear Heaven only to the extent of their fear of mortal man?  The fear of spiritual retribution should be far greater!

Likewise, Rabbi Yochanan blesses his students that their fear of sin be not the fear of Divine retribution, but embarrassment of the sin itself.  We should be simply embarrassed of standing in the presence of G-d and acting inappropriately.  Maybe He’ll punish you, maybe He’ll have mercy on you and let you off.  But that’s irrelevant.  The main reason to avoid sinning is how embarrassed you should be feeling in His presence.  He’s watching you and that should be enough reason to do the right thing.

The Baal Shem Tov explains the verse in Song of Songs (2:9), “He looks from the windows and peers from the cracks,” as a reference to the irrational fear that often overcomes a person before he sins.  He’s about to act out of line, when he suddenly starts imagining people watching him from the adjacent window or through a crack in the wall.
‘Did anyone see me?’ he wonders, ‘I could have sworn I saw some eyes peeking out of the dark crevice!’

That feeling, says the Besht, is a manifestation of the Divine power in the world.  Fear of Heaven expresses itself through various physical vehicles.  The person who feels someone is watching him is actually feeling the ‘eyes’ of G-d upon him.  It is the fear of Heaven that has been sent down to assist him in resisting temptation.  Thus, says the Baal Shem Tov, Rabbi Yochanan’s blessing is that we should recognize that the fear of mortals peeking at our misbehaviour is really Hashem watching us and keeping us safe from ourselves.

Our Father in Heaven loves you.  He’s not watching you to catch you out.  He’s watching over you to assist you along the challenging journey of life.  May you always see His guiding hand and may you sensitise yourself towards HIs presence such that it would feel embarrassing to engage in inappropriate behaviour!

Posted by Rabbi Daniel Friedman at 10:28 AM